I am not so big on over-analyzing event charts, like “oh, jupiter in Virgo retrograde means that you will obsess over details”, even though when it comes to Facebook, that is certainly the norm. Most of us have been there, messing up post after post by editing comments. However, that is not my main objective today, we can talk about the rest of the FB chart another time. Today, I will rather lend focus to a most interesting aspect of this astrological piñata of a chart, namely the Sun-Neptune conjunction that is sugarcoating this marvelous miracle of a graphic example of an astrological chart.

Facebook! It can’t get better, it is if as if I could prove astrology simply by analyzing this chart, step by step according to cook-book-astrology. Sun-Neptune in Aquarius. Groups of people coming together in a dimension known as Internet. Sounds mighty Aquarian. As Patricia Walsch would say: “you can’t make this shit up”

And why is this chart worthy of such a statement? Let me invite you in to explore the archetype of Neptune, the major player in this chart. 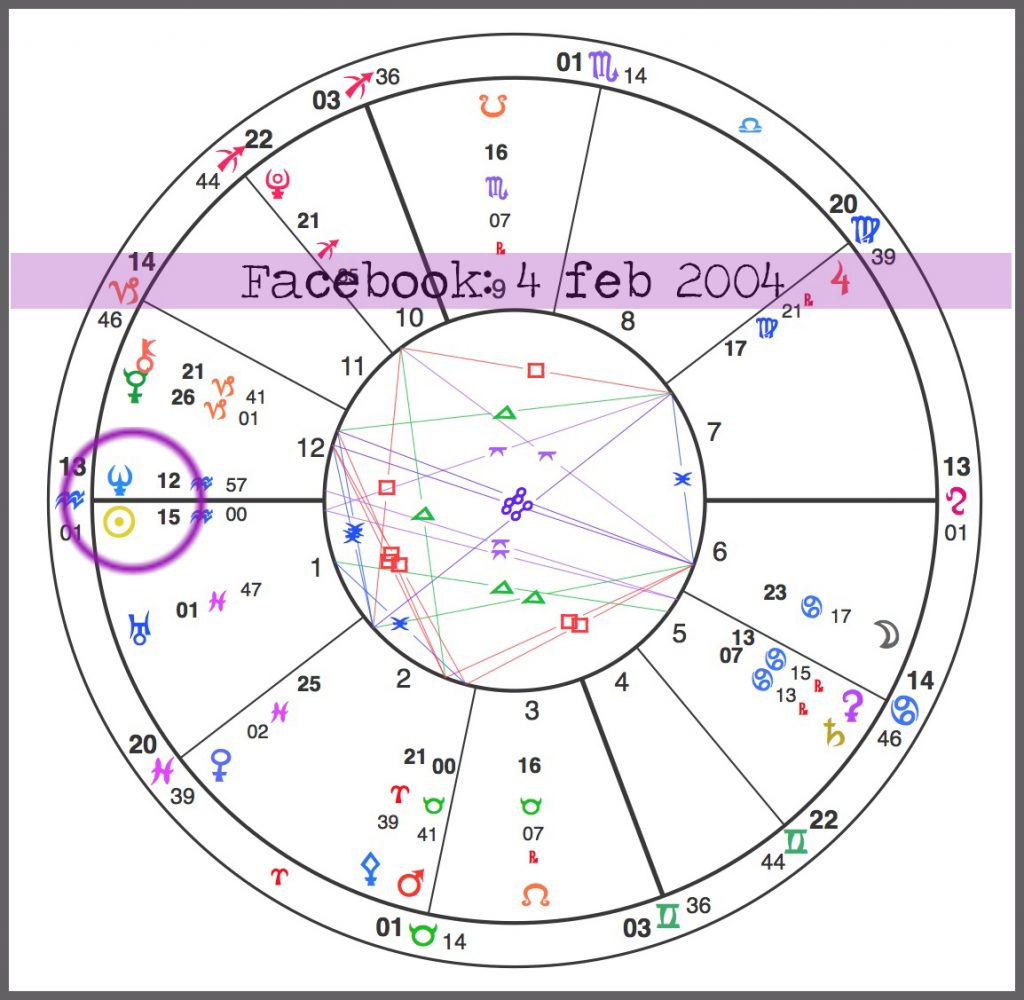 Neptune is the modern ruler of Pisces (the classical is Jupiter) and as the archetype of the final sign of the Zodiac, it represents the all and nothing, the vast womb of life, from where all life came from and will eventually return.

As the God of the Ocean, Neptune is a principle that permeates life, the collective un-conscious as Jung would call it. It is that astral or emotional field that permeates and connects us. This is why in Pisces we find unity with life itself. We find connection to that deeper layer of substance that we swim around in, often blissfully unaware. It is in this ocean of emotion that we realize that we are not alone, that we are in fact one. Therefore Neptune’s slogan could be “all is one, one is all”

From this perspective, there are no boundaries. Actually there is no body either. It is just a soup of movement that without any boundaries just as easily can lead to madness as it can lead to enlightenment. In order to get in touch with higher realms, the realm of spiritual connection or intuitive glimpses into deeper life, we need to loosen the connection to our mental selves. Neptune is that part that is no mind, it is pure being. It is the part of the brain that relates to the pineal gland, which is said to produce DMT, the God Molecule and that is known to produce melatonin, the hormone that takes us away from everyday life and into dreamtime.

There, in the vast womb of cosmos, we disappear a bit. We relax into nothingness. Perfect Pisces meditation. Oh, and the marvelous stuff that happens in dreams when the will is out of function. You can compare it to an adventure where anything can happen. In real life too, when Neptune kicks in and you are off on a wind, you bump into people you haven’t met for a hundred years or you run into the most mystical, but fabulous experience. Like a brilliant sunset you wouldn’t have seen if it hadn’t been for you saying yes to going for a walk with someone you just bumped into while shopping.

If you had followed routines and said no, the adventure wouldn’t have happened. But once you let go of control, you sail along on a pearl string of synchronicity. Floating around on whim can also turn to trouble. The story of the uber-naïve Neptunian that got lost, or got himself into trouble because he got too drunk that night and lost his common sense is one we frequently hear of. Neptune is being, not doing. It is floating, not planning. That can be fun and it can be devestating.

Sounds like something that you do in front of the computer while you are floating around without will, but on whim, flicking through posts. And on Facebook in particular? Ever had that feeling that you’ve been wasting hours, but still had a very meaningful time? Synchronicities and strange connections, strangers that seems like the deepest soul mates and wonderful videos that take you into realms of humanity you never before knew of? That opens your heart or infuriates you? Been there?

Or you’ve also perhaps felt that “ops!that wasn’t the wisest thing to get caught up” in after you participated in a debate at a friend’s wall, and instead of being present to your immediate surroundings you find your head spinning in all directions, plotting the next, smart thing to say. Or you realize that you hurt someone by a sloppy remark and you can almost feel this person’s anger. Or, you started thinking of someone, and ping! you got a message on messenger from this person.

In the ocean of Neptune we are connected. Inter-connected. Internet-connected. The interconnectedness was here before the internet. But with the web, we start to see these workings more clearly. They haven’t been able to reproduce synchronicity in the labs yet, so we are perhaps still a decade or two away from proving the Soul and its magical workings like telepathy, but in the waters of Facebook, we’ve all had our share of “wow, did that just happen”-experiences. Random you might think. Well it is only random until a pattern forms and you are suddenly repeating randomness. Then it is a pattern.

Let’s talk a bit about patterns, shall we? In healing we have a concept called etheric network. The concept of the etheric double came from theosophy, and has been described in sources like Blavatsky, Steiner and Bailey, and the concept is called prana in Hindu texts. It is said to be the connecting energy network that couples the worlds together. Astrologer Barbara Hand Clow ascribes this etheric energy to the principle of Uranus, the modern ruler of Aquarius. She is perhaps finding her sources to this theory in the works of Alice Bailey, who writes:

[11] body of the solar system. This is related to the etheric bodies of the six solar systems which, with ours, form a cosmic unity and into these pour energies and forces from certain great constellations. The field of space is etheric in nature and its vital body is composed of the totality of etheric bodies of all constellations, solar systems and planets which are found therein. Throughout this cosmic golden web there is a constant circulation of energies and forces and this constitutes the scientific basis of the astrological theories.”
(Esoteric Astrology)

Esoteric astrology claims Uranus to be the ruler of the etheric body, and when we look to the more common interpretations of Uranus and Aquarius, we relate them to groups and connections on a group level. Facebook has proven to be quite the enzyme for group relations. As an astrologer, it has been a blessing. If you’ve noticed, astrologers do not grow on trees and we are more than thrilled when we meet someone who belong to our “group”

Astrologers are not the only one who has been finding their kin on Facebook. Myriads of people come together in groups to discuss and share, and from a spiritual point of view, many interesting developments in society have occurred thanks to Facebook. The Arab Spring was said to have gained its momentum thanks to Facebook and it is of no wonder that more restrictive societies like China, bans Facebook. They know how powerful an army of ants can be.

But let’s go back to this etheric network. In the chart of the Facebook, we see the ruler of the Sun in Aquarius is in Pisces. There is a mutual reception between Uranus and Pisces if we use the modern rulers. And the effect that Facebook has on us, is that it gives us a glimpse into the collective mind and how it operates. It actually shows us that we are connected, in stranger ways than we previously thought.

Right now Neptune is in Pisces and last time that occurred was back in the 1850’s. That period of time was known as the first wave of globalization. The Gold Standard was set and it led to a period of increased global trade.

Now that we are back to Neptune in Pisces we see more clearly than ever that we are connected. For better or worse. What goes on in the Global Mind affects us all, and the small voice is given a stage where each person can create, if they want, an influence to change the course of the future.

How well we deal with this responsibility is yet to be discovered. We do see now some of the more dire consequences of our creation, but we also see that many of our most precious ideas about life and connectedness are about to change. Whatever you put out there, creates ripples in the etheric network and we will all see that even though we just push the like-button, we are part of that creation. It makes us all important. Yes, we are actually co-creating this shit.

Btw, my Sun is just there on the Sun of Facebook. So if anyone thinks I like Facebook a bit too much, I can always blame the astrology. And I frequently do.